This last week for our weekly watching of Dancing with the Stars and dinner I had the dessert to go with Michelle's pasta and Carol's salad and garlic bread. Of course I wanted to make something with pumpkin, as is fitting for the season, but since we'd had pumpkin desserts the last two weeks I was feeling a little sorry for Kevin (who doesn't like pumpkin). I decided to make Kevin's all-time favorite dessert... Black Bottom Pie. This recipe is a little bit of work, but totally worth it! It's a chocolate crust with a layer of rich chocolate custard and a fluffly layer of meringue topped with whipped cream and chocolate shavings. YUM! 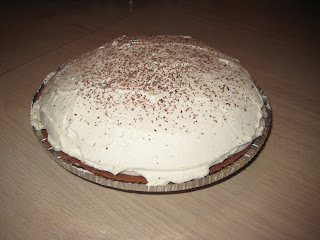 Crust:
I just used a store bought chocolate cookie crust (don't use the oreo one).
If you would like to make your crust from scratch:

Custard:
3 egg yolks
1 1/2 cup milk
1 1/3 cup sugar
1 1/2 Tablespoons Flour
Mix sugar and flour in a sauce pan. Whisk together milk and egg yolks then
add to flour mixture. Whisk until there are no more lumps.
Cook over medium high heat, stirring constantly with a woodend spoon until the mixture
boils and forms a custard.

Mix gelatin with remaining custard and place in fridge, stirring every 10 minutes until cool, but do not let set completely or it will be lumpy when mixed with whipped egg white mixture (below).

Fluffy Meringue Layer:
3 egg whites
1/4 teaspoon cream of tartar
1/3 cup sugar
1 Tablespoon vanilla
Beat egg whites with cream of tarter until foamy.
Gradually add the sugar to the egg whites and continue to beat till
stiff and glossy peaks form. Beat in the vanilla.
Gently fold egg white mixture with the cooled custard mixture.
Pour in crust over chocolate layer. If mixture is not stiff enough to
mound on pie crust refrigerate untill set up a little.

Finishing:
Grate or shave a square of semisweet or unsweetened chocolate on top. 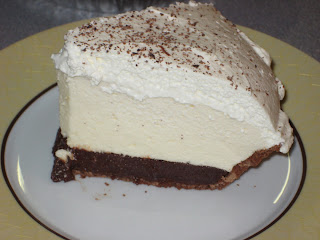